Combining the power of the sun and the wind might be cheaper and more reliable than using just solar energy alone, or, in some cases than connecting to a utility grid. 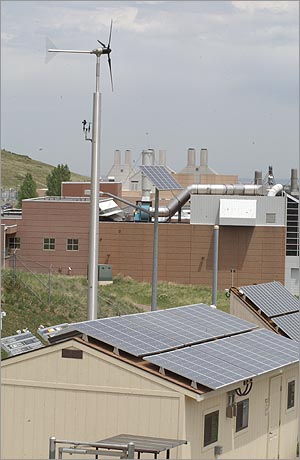 Researchers with NREL's PV (photovoltaics) International Program currently are testing and collecting data on hybrid power systems, including a small hybrid solar and wind energy system at the Laboratory's Outdoor Test Facility (OTF), to show how these systems can power remote households and villages as effectively as solar, wind, diesel or battery power alone.

In remote areas of the United States, it can be difficult or costly to connect to a local utility grid, while in rural villages in the developing world connection to the grid often is not an option. Hybrid power systems are an increasingly economic alternative for several reasons: solar and wind technologies are modular and the seasonal variations of solar and wind resources often are complementary.

"Hybrid systems show how wind and solar complement each other in a big way," Lorenzo Roybal, a master research technician with PV International Programs, said. "Either the sun is shining or the wind is blowing, so there is always something producing power."

Many rural areas, such as the Chinese province of Inner Mongolia, have benefited from hybrid power systems. Although wind power had been widely used in the area since 1980, the systems were unreliable during the summer when wind resources were low.

NREL conducted a case study to see what would be the best systems for the region, considering costs and resources. A PV/wind/battery hybrid system was determined to be the most reliable and cost effective system for this particular region. The hybrid systems were so successful, provincial and state governments in Inner Mongolia plan to install as many as 60,000 more during the next five years.

The hybrid system at the Laboratory produces 1,400 watts of power from solar and 900 watts from the wind turbine when the wind is blowing at 28 miles per hour. The 48-volt system has eight batteries for storage. The small hybrid system is housed in an insulated shed, the PV International Program's Test Building (ITB) which contains equipment to provide "load" for the system, including a refrigerator, lights, heaters, air coolers, computers and a radio.

"By running these normal household items, I'm attempting to replicate a typical load for a small home to see how it affects the battery system," Roybal said.

As part of ITB project, the PV International Program is providing live data and details on the system's operation via the Web. For more information, visit International Systems Testing.